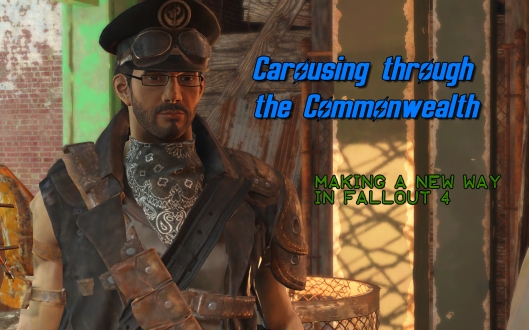 I’ve played many, many hours of the post-apocalyptic adventure game Fallout 4.  I’ve finished the over-arching main quest and hundreds of side quests.  I’ve saved the bombed-out Commonwealth around a destroyed Boston and become powerful.  Although games like this give you the feeling (sometimes the illusion) of being open-ended where you can do whatever you want, I thought the main quest of Fallout 4 was ultimately quite controlled, cliched, and disappointing.  It was certainly the least rewarding part of the time I spent with the game.

After some time away, I got the itch to return to Fallout 4, but knew I didn’t want to jump through the same hoops with a new character.  So I decided to use player-created mods (scripts you can add to the game to change parts of it) to make a new way.  To ignore the badly written main-quest and just enjoy the game mechanics, side quests, and fun of running around in an interesting and compelling world. 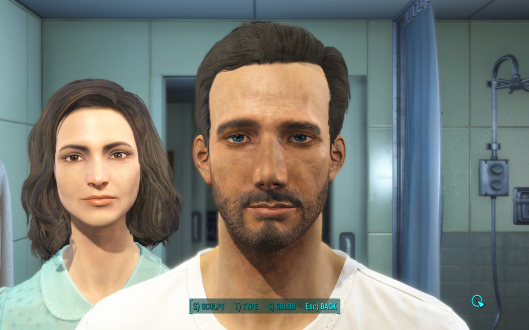 One of the things I also wanted to do was make the game narrative more LGBT-friendly.  The company that makes the Fallout series, Bethesda, has a mixed history of creating inclusive and diverse games.  Their handling of non-heterosexual sexuality has always been clumsy, and their handling of gender often ridiculous.  I hope to use mods and other tools to overcome the many limitations Fallout 4 imposes upon the player character regarding identity and sexuality.

With this return to the radioactive Commonwealth of Fallout 4, I began to think about how I could create my own narrative in the game.  Freed from the overarching narrative imposed by the company that made the game, how would I anchor my character’s decisions and actions?  Games like this encourage exploration.  Going out and finding your own adventure.  How would I tell my story?

I decided to record my play through and provide narrative commentary.  I’m still quite new to this, so the first couple episodes I’ve recorded are a bit more about the game mechanics than building a narrative, but I’ll hopefully hit my stride soon.  I’m looking forward to using the game to tell short stories– to use my character as a protagonist and explore narrative through game mechanics (and the language of video editing).

How to Watch:  If you would like to watch what I’ve done so far, you can find the videos on this YouTube Playlist.  I’ve given the series the title “Carousing Through the Commonwealth.”  I’ll post more as I embark upon a new (for me) way of creating narrative.

The man does not make it easy on himself for his video shoots. Here is the heartbreaking “Gay Pirates“, the very funny “Love This“, and the poignant “Tell Me Who To Be“:

A Murder of Crows on the Wall, crows, matt alber, video

In a new DVD, Matt Alber gives new arrangements to some of his songs by involving a cello string quartet. The result is truly amazing and they deliver an incredible performance.

In the clip below, the song “Old Ghosts” even includes a line that jumped out at me with this viewing. The novel I’m currently writing involves initiates to the Roman cult of Mithras, or “Crows”. It is a murder mystery set in the 3rd century province of Britain, and although the topic of the song and the novel are very different, the line “I hear the crows, they know what nobody knows…” hit me in the heart.

Old Ghosts (from With Strings Attached) from Matt Alber on Vimeo.

You can find Matt’s DVD here at his website: http://www.mattalber.com/cellos/

I’ve just submitted a project on kickstarter to fund a trailer and six short webisodes featuring a professional voice actor reading excerpts from Pantheon.  It has gone to the ‘review’ status, and I’ll let you all know when I hear back that it has gone live.

Through the great site voices.com, I can hire a professional voice actor for around $300 for an hour of recording time.  I am asking for $600 on kickstarter to hire one male and one female voice actor to read at least six short excerpts from the novel.  I will pair these with visuals and produce a trailer and a few audio examples of the story.  Hopefully posting these in various places will give potential readers a flavor of the novel.