State of Decay is both an amazing game experience and sometimes an amazingly frustrating game. I am usually not a big fan of zombie games (and I am often wary of their bloodthirsty fan base), but I really like State of Decay, and it was definitely the second best game I played this year after The Secret World.

Also like The Secret World, I only stumbled upon this game by accident and got hooked early. Unfortunately, being an early adopter meant that I was also a victim of State of Decay’s many early bugs and errors which should have been fixed before launch (some of which still persist), as well as some annoying imposed restrictions and hoops the developers inserted into the gameplay. But what fun gameplay State of Decay has when all things work well! 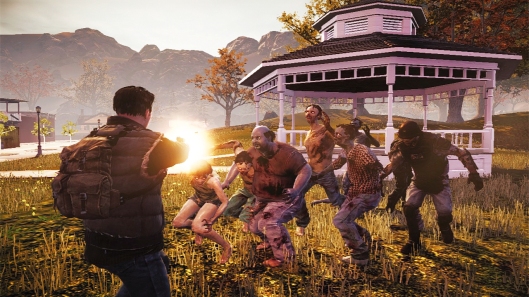 State of Decay is meant to be a zombie post-apocalypse sandbox-style game. You manage a group of survivors who band together in a fortified building and scavenger for supplies- everything including food, building materials, medicine, weapons, and of course ammunition. You gather supplies by heading out into the zombie infested towns and countryside that make up the game’s 16 square mile map. There is also the chance to find special weapons and tools that can increase your community’s chances of survival.

Most of the time, if you’re paying attention, taking out one or two zombies on your own with just a pipe wrench is no problem. But of course, zombies like to congregate in groups, often forcing you to become creative. The player that just storms into a ‘deserted’ house looking for supplies will probably not last long, as all that noise will attract wave after wave of shambling undead. Special mutant zombies also add to the difficulty, not to mention the need to manage the personalities and tempers of your group of survivors. 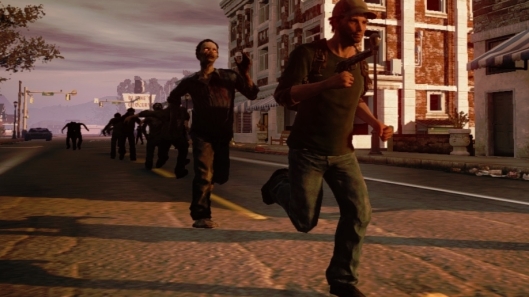 You don’t control a single character in State of Decay, which is understandable because all that scavenging and fighting is tiring. You can switch between characters that you have ‘befriended’ through helping them out, and renew the search for goodies while a tired character catches some much-needed sleep back at the homestead. During the day, searching for supplies is always harrowing. At night, the number and strength of the zombies ramp up as the darkness encroaches. You can never let your guard down while playing, even if you’re just taking an abandoned car across the map to check out an old factory. The game gets the balance between survival horror and progressive gameplay right.

And if your character dies at the hands of a roving zombie horde, they’re gone forever. All the time you spent to level up their abilities is moot. You can only now switch to one of your other community members, and hope your people don’t now begin to panic at the loss. Similarly, once a house or factory or store is searched and cleaned out of supplies, that’s it. The building remains empty for the rest of the game (although some zombies may move in– zombies, unlike supplies, are infinite). All supplies, including cars, are a limited resource. In the main game, a central quest line urges you to find a way to escape the valley (and certain death) before all the supplies you can get run out. In the DLC that has just been released, called “Breakdown”, you can play the game without the main quest and ‘renew’ the map with increased difficulty (number of zombies, frequency of harder mutant zombies, fewer overall resources) at each incarnation. 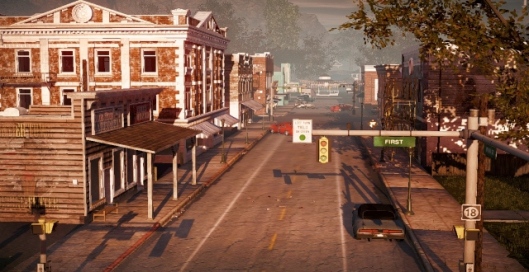 The art direction of the game is really great (although the character models could use a bit more diversity in style- although a healthy dose of diversity in race and gender is thankfully included). The landscape, and the attention to detail in the builds, is phenomenal. There are some issues around lag and texture popping (memory limits were pushed for the original Xbox release, and not much optimization was made for the PC version), but you can play around these limitations for the most part if you’re cautious.

Special praise must be singled out for the game’s sound direction and music. You must play with the sound on because often the noise of a zombie approaching is the only warning you have before you’re attacked. Also the way in which the game uses audio is amazing. The music is by legendary game composer Jesper Kyd and both perfectly enhances State of Decay’s visuals and evokes a range of moods including terror, pathos, humor, and of course, hope. The soundtrack can be entirely previewed on Jesper Kyd’s site  and purchased on iTunes and other places. 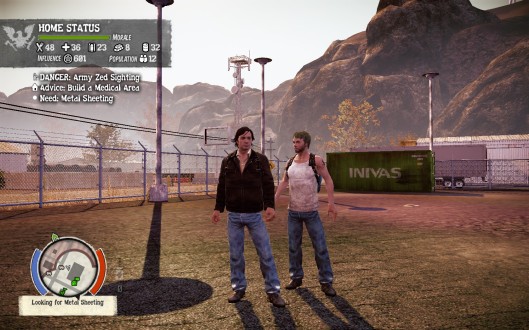 One negative aspect of the game is that when you stop playing and shut off the game, the action still continues. The survivors in your community still venture out into danger to look for supplies, still consume resources, and sometimes still act in bizarre unhelpful ways (like running away and hiding somewhere on the map when they get scared). This goes on for as long as you are away from the game (although not exactly a 1:1 ratio of hours). The developers have never really given a helpful explanation as to why they implemented this feature beyond just purposefully imposing events that are out of the player’s control. They say this would just be like managing a real life group where you couldn’t control everything, but in the end it just frustrates the careful player who can log on and find (especially in the early days of post-launch) all the work done to stabilize the community completely undone with dead characters and destroyed group morale. This feature also hampers both the player that can play a lot (diminishing the results of many straight hours of effort) and the casual gamer (who gets penalized for the time they are not in game, and punished by the offline consumption of resources). Thankfully, much of this feature has been neutered in subsequent updates, so large was the initial outcry from players, and now is just a minor impact, which usually can be tempered with smart gameplay. But from the beginning it was a bonehead feature that provided no real benefits only penalties. 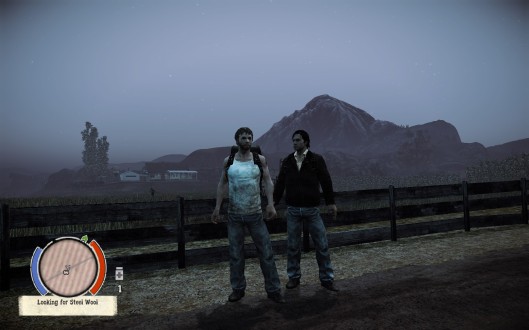 The team that put out State of Decay, Undead Labs, is small, which probably contributed to the fact that the launch game had lots of game-breaking bugs (I once logged in to find one of my survivors had shot and killed the radio operator who gave me quests. She was dead on the floor of the safehouse, but was still talking to me on the radio. That game had become borked while I was offline, and all previous work wasted). Over the past months, many of those bugs have been solved, although there are some (the dreaded “Seek and Rescue” bug that will permanently wreck a character’s mood if you actually go and find them when they run away) that inexcusably still persist. Launching on Steam also seems to have introduced some others, usually with work arounds if you search their forums.

But with all of its unpolished nature, and all of its persistent bugs, nothing comes close to the joy of sneaking around a small deserted town, trying to find a decent weapon and some food for you ragtag group of survivors holed up in the abandoned trucking warehouse, while roving hordes of zombies attempt to find you and make you lunch. All players have stories of that time that they barely escaped the grocery store after being surprised by a horde, only to run into a feral zombie down the street. Piecing together the clues of what caused the apocalypse (the game does not tell you directly) is fun and most of the characters are interesting. With enough raw materials, resources such as gardens, machine shops, and even libraries can be built into your base. You can see your enclave evolve in real time, and your stable of ‘heroes’ become lean, mean, zombie killing machines. 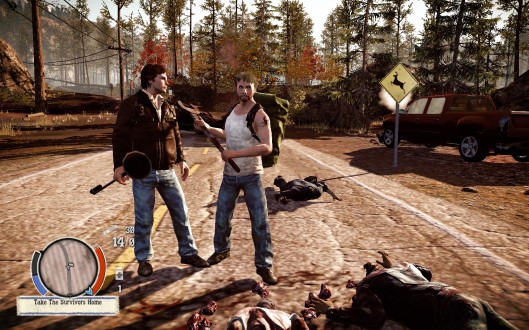 And as an added bonus, there’s even a (very brief but memorable) same-sex relationship portrayed positively as just another aspect of life after the apocalypse (Jacob and Eli above).

While State of Decay has its issues, it also has fun by the barrel-ful for those interested in a hybrid of a sandbox resource gathering game with relentless zombie smashing combat. And it’s only $20 on both Xbox and Steam (for PC). 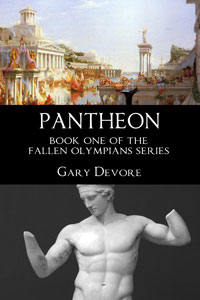 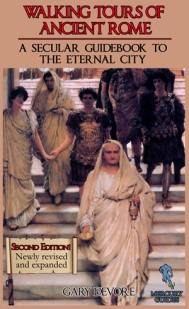