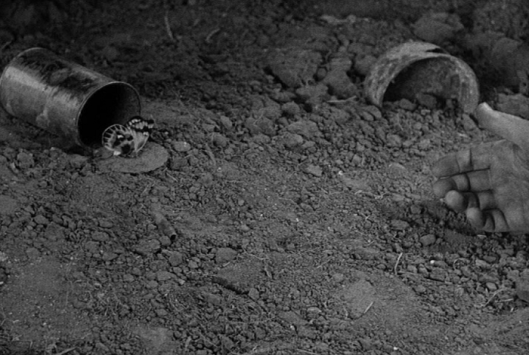 The penultimate scene of All Quiet on the Western Front (1930), a far better piece of cinema than anything associated with Mel Gibson.  If you don’t know it, learn it.

In the 19th century, photography brought the carnage of the American Civil War home to the civilian population.  Photographers captured the torn and twisted bodies of anonymous soldiers strewn across battlefields, and those images were published in newspapers and journals to show the cost of a war that would go on to kill 2% of the entire population of the country.  The barbaric violence was put on full display and changed our national perception of death.

During the brutal trench warfare of WWI, photography, and also increasingly the moving image, documented horrible new forms of mass death men inflicted upon men.  Poison gas and the machine gun rendered killing impersonal.  The brutal slaughter, the bloody sundering of bodies without discrimination, horrified a generation of European men.

Anonymous men in uniform get torn apart let and right in Gibson’s new film– and most of the time in “cool” graphic ways bordering on both the sadistic and acrobatic.  Unnamed soldiers are “disposable people” and their cinematic suffering is presented without any real thought or comment other than a voyeuristic pleasure inversely proportional to any audience’s sense of compassion.  These torn-apart bodies are dehumanized on the screen (especially the non-Christian Japanese).  They are background meat-scenery.  They are not protagonists.  They are not actual humans with thoughts and emotions, or anything the camera is willing to linger on except their blood, viscera, and gore.  These men are mute but for their screams.  In the larger narrative, they don’t matter because the camera only objectifies their anguish.  The film perversely revels in their messy deaths.  Their only role is to convey whatever pious, cruel, muddled message Gibson’s harping on now (jonesing for some sort of professional comeback without, you know, actually doing any real contrition to deserve it).

This lack of compassion, or at least the failure to apply it uniformly, is a tiresome hallmark of Gibson’s directorial work.  It is also a theme in the novel I just finished.  I’ve written a murder mystery set in the ancient Roman world– a brutal world Gibson would have felt at home in.  But I didn’t want to just present corpses for my detective, already cold MacGuffins simply representing puzzles to be deciphered.  I wanted to explore what it meant to be a compassionate man in that time who understood on a deep level that there really are no “disposable people,” and only our immature selfishness deems them so.  My main character, Gaius Pedius, learns every life has value.  He realizes that every man who dies on a battlefield (or is cut down by a murderer) is the subject of his own tragedy, his own subjectified reality.  Pedius’ investigations are not just a search for justice, but a forceful rejection of men like Gibson (who exist in every age) and their bloodthirsty nihilism. 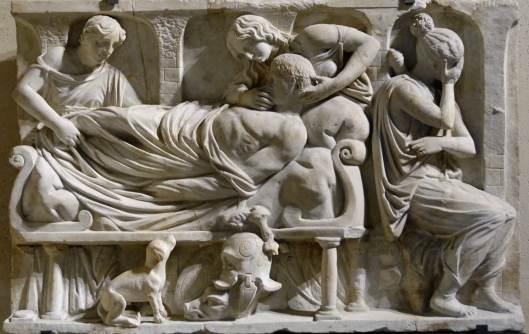 I’m assembling the final draft now and getting ready to begin the protracted process of querying agents to shepherd it toward publication.  Along with hopefully being an enjoyable, amusing mystery novel, I hope A Murder of Crows on the Wall can also be, in its small way, a compassionate, Humanistic counter to our modern American trend toward dehumanization and cruelty.  And anything else Gibson puts up on the screen.

I was writing today about the Campo de’Fiori in Rome (preparing a small waking guide for a friend soon to visit the city) and happened to notice that it was the 416th anniversary of the execution of Giordano Bruno, a personal hero of mine.

Bruno was originally a Dominican monk, but left the order to roam northern Europe and England, usually one step ahead of the Catholic Church who considered him a dangerous heretic. Bruno believed that the universe was divine in itself, and that such divinity was contained within every living creature. He wrote, “Nature is simply God in things,” a beautiful statement, but one that went against Catholic theology.  He also believed in such heresies as the heliocentric model of the universe where the Earth revolved around the sun.

Eventually, the Inquisition caught up with him in Venice. He was imprisoned in Rome for several years before being condemned to death. After the sentence was read, Bruno said, “You judges who condemn me make the pronouncement with much more fear than I who receive it.” Bruno was executed in the Camp de’Fiori on 17 February, 1600. He was gagged, bound naked to a stake and set on fire.

After 1600, the square was regularly used as a place of execution. Many people, criminals and heretics, met their fates here, either by being burnt or hung.  Today, the picturesque square, the only major square in Rome that does not have a church in it, is dominated by an imposing statue of Giordano Bruno.

I can recommend a good book about Bruno and his times: The Pope and the Heretic by Michael White. 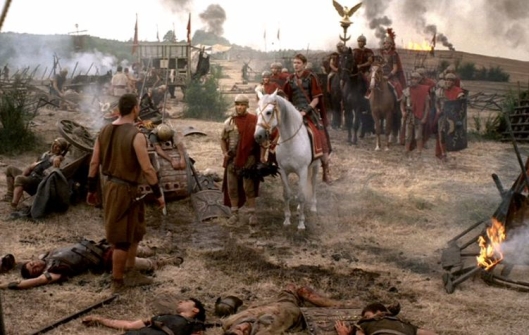 A new article of mine about torture and its (changing) depiction in films about the ancient Romans has been published on The Awl: Now We Are Rome: Ancient Roman torture on film, and modern American torture in the news

Brought to my attention by Dorothy King the PhDiva: “A fourth century BC sword may have the oldest known inscription of the name of Rome.”

The inscription reads: TR POMPONIO(S) C (f.?) (M)E FECET ROMA(I).  The letters in parentheses are supplied by the excavators, since often Latin inscriptions could leave out parts of words and endings.  They reconstruct it as: “Trebius Pomponius, son of Gaius, made me in Rome”.  Presumably the “ROMAI” they supply is in the locative case, which would be “AE” normally but was “AI” in Old Latin (or so JSTOR tells me)

The sword was found in 2003 in the excavations of a water cult sanctuary near San Vittore del Lazio (southern Lazio).  The excavators claim it is similar to swords used in the La Tène B2 period.  (Notice posted in Italian)

The sword is mainly dated by the Macedonian star decorations.  Another very early inscription that records it was made “ROMAI” is the famous Ficoroni Cista.  It also possibly dates to the 4th century BCE.  If both can be considered products of Archaic Rome (having recovered from the 5th century economic crisis), they are important archaeological evidence that the settlement on the Tiber called itself Rome. 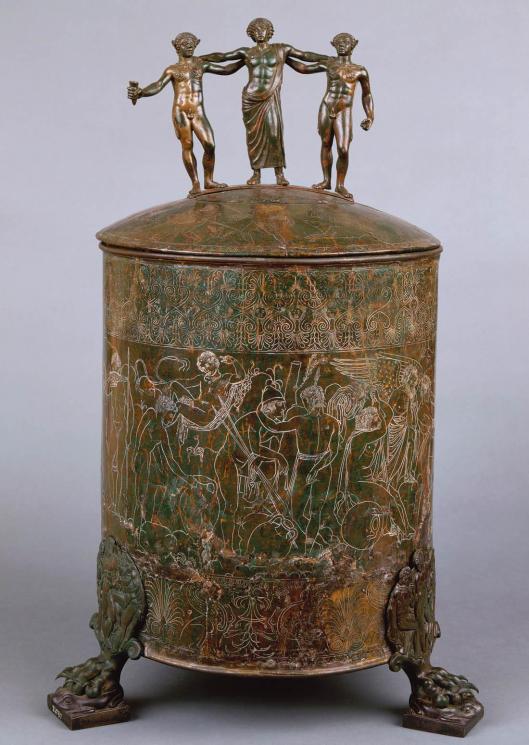 Via Rogue Classicism, here is a short video showing a bit of how Rome’s monuments looked in the 1920’s.  This was before Mussolini began the wide-spread clearance and isolation of these monuments with state-sponsored archaeology.

I was particularly tickled so see cars using the Arch of Constantine as a traffic circle.  There are some errors though.  At about 1:57 the “House of the Vestals” is misnamed.  What is shown looks like the Basilica Julia (unless the image is reversed given the placement of the Temple of Antoninus in the background).  The “Temple of Vesta” is also absolutely misidentified at 0:37 since back then most people thought any round temple had to be to Vesta.  What is shown is actually the (variously-named) Temple of Hercules Victor from the area of the Forum Boarium, not the Vesta Temple.

Just a quick call-out to the great advertising HBO did for the second season of Rome which saw pictures of the cast scrawled with graffiti. I was reminded of this recently and am still amused by the clever use of this ancient trope, which was also a plot point in that season.

Here is some more Roman graffiti, always fun reading, and a rare insight into the lives of the non-elites in the ancient world.